In September 1915, almost 16 months after her departure, Marya Czaplicka returned to Oxford (see May 1914 blog).

The long and arduous trip, complicated by the outbreak of war, was an overwhelming success. The expedition, under the auspices of the Oxford School of Anthropology, was funded by a grant from the Pitt Rivers Museum, the Mary Ewart travelling scholarship and fundraising among Somervillians by Miss M.C. Scott. Primarily interested in shamanism, much of Miss Czaplicka’s research was ground-breaking; early on she encountered the Yurak tribe, ‘practically unknown in anthropological literature’ whose ‘exceedingly rich and varied folklore’ she described as ‘unsurpassed in its realism and simple directness of style’ (SSA Annual Report 1915). 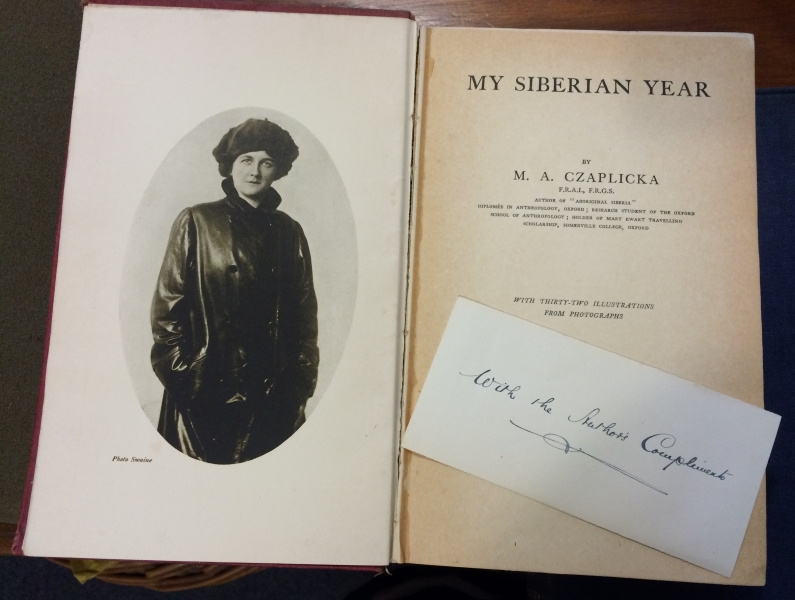 Miss Czaplicka was accompanied by the American anthropologist Henry Hall and, for the first five months, by the painter Dora Curtis and ornithologist Maud Haviland. They travelled by river steamer when they could and, once the river froze, she and Hall journeyed over 3000 km by reindeer sledge across the tundra. They spent the winter living amongst the Tungus people, studying their political and religious institutions and way of life. They both collected artefacts: Marya Czaplicka for the Pitt Rivers Museum and Henry Hall for the Philadelphia University Museum. Their finds included bones from a woolly mammoth, discovered in the ice.

Although communicating with the outside world was extremely difficult, post having to be carried sometimes hundreds of miles (passed from one tribesman to the next), letters were exchanged with Somerville and she was even sent a copy of her recently published book Aboriginal Siberia. Marya Czaplicka’s replies to Miss Penrose revealed her anxiety for her family in Poland, under threat of German occupation, and her ever-present concerns about money, as the war caused delays in transferring funds as well as inflated prices. She rarely wrote about the difficulties encountered on the trip, making just a passing reference to illness or the need to buy more furs before the ‘great cold’ began. It was her travelling companion Dora Curtis who, on her return, wrote to Miss Penrose describing Miss Czaplicka’s illness and exhaustion caused by over work, her sea sickness, so severe that she brought up blood and the absolute necessity for costly new furs if she was to survive the Siberian winter.

The return journey took weeks, the only route open being via Stockholm and Christiania to Newcastle. At one point, concerned that she would not be able to get her collection of materials back to England due to baggage restrictions and the cost, she considered leaving the cases in Moscow, to collect after the war.

Once back in Oxford, Marya Czaplicka received further assistance from the Mary Ewart Fund to enable her to ‘prepare her valuable material for publication’ and in 1916 she published her account of the expedition My Siberian Year. She was also appointed the Mary Ewart lecturer in Ethnology at the Oxford School of Anthropology.