In 1919, a student called Margaret Bunbury Foote came up to Somerville to read English. Her father was a clergyman and her mother a suffragette and member of the Women’s Social & Political Union. Amongst the papers Margaret Foote was later to leave to Somerville College was the travel diary she had kept during her summer holiday in 1914 when, as a 15-year old, she accompanied her mother on a trip to Germany to visit friends.

The daily entries changed from a catalogue of sights seen and snippets of local detail to a fascinating record of their experiences as enemy aliens upon the outbreak of war.

Margaret recorded the reactions of their hosts and fellow tourists, caught out by the sudden escalation of hostilities; she and her mother met with surprise, confusion, suspicion and kindness, patriotism and resignation, and, as in Britain, the belief that the war would soon be over.

Margaret’s writing also reflected the excitement of the situation and the humorous aspects of their predicament; it was not until the 30th August, when they had finally reached France, that the sight of a long, silent train of wounded soldiers ‘brought the war home to us more than anything else I think.’

They returned to England via Switzerland and France. As Margaret and her mother slowly progressed towards the coast, they encountered refugees and troop trains, heard conflicting accounts from the front line and eventually boarded a steamer for Folkestone, filled with other British travellers and hundreds of French and Belgians fleeing from the advancing German army. The diary concludes, “Best of all was to know that we were safely back in our own dear country again! All the same, I would not have missed those five weeks for anything!”

All day, Sunday though it is, the shops have been open by order, so that the men can buy things before going to the front….I want to photograph these beautiful, crooked, old streets, with their picturesque little houses; but they will not let me because of the war… A policeman told me today that two ladies were put in prison on Friday for photographing the bridge!

“War is declared with England.” This is the first thing we heard on coming down to breakfast.

…Then we began to talk about the war, as everyone does, and Mother asked him his opinion of it all. “Well, personally,” he replied, “I believe that if women had had the vote, this war would not have broken out.” It is astonishing how many people are in favour of Votes for Women here in Germany. They seem to think it so natural that women should have the same rights as men.

A train full of wounded soldiers from St. Dié was expected almost immediately and Red Cross nurses were preparing to receive them. Beds had been made up in all the station waiting rooms for those who were too bad to be moved to the hospital. In a few minutes the long, silent train came in and porters and nurses carried many of the men to the ambulances. Others, who were more slightly wounded, walked alone….. A few minutes before we had all been talking and laughing; but now we stood silently watching these men, with their muddy, blood-stained uniforms and bandaged heads and arms, as they walked past us.

We invited a French officer who was sitting near us ‘to tea’ at 4 o’clock…He told us a sort of poisoned gas had been invented, only a few days before France declared war, which could kill whole regiments.

The boat was crowded – eight hundred people being on board. There were the three hundred of us, English people, who had come through from Switzerland and the others were all Belgians and French refugees. 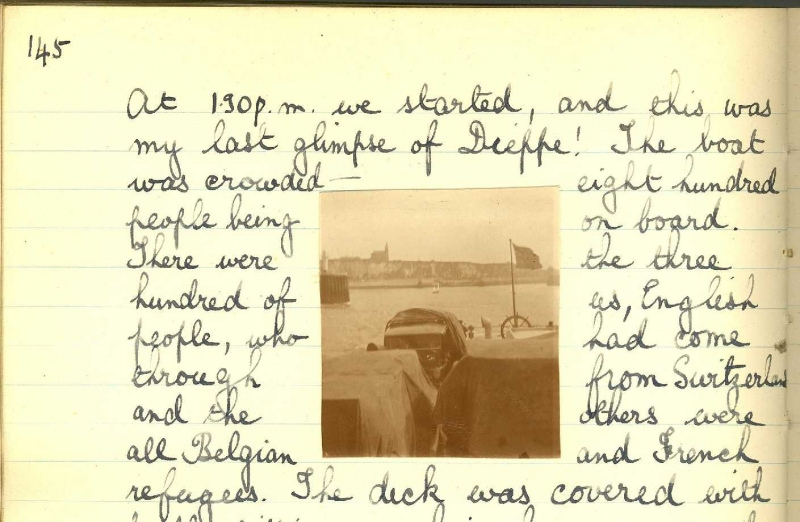