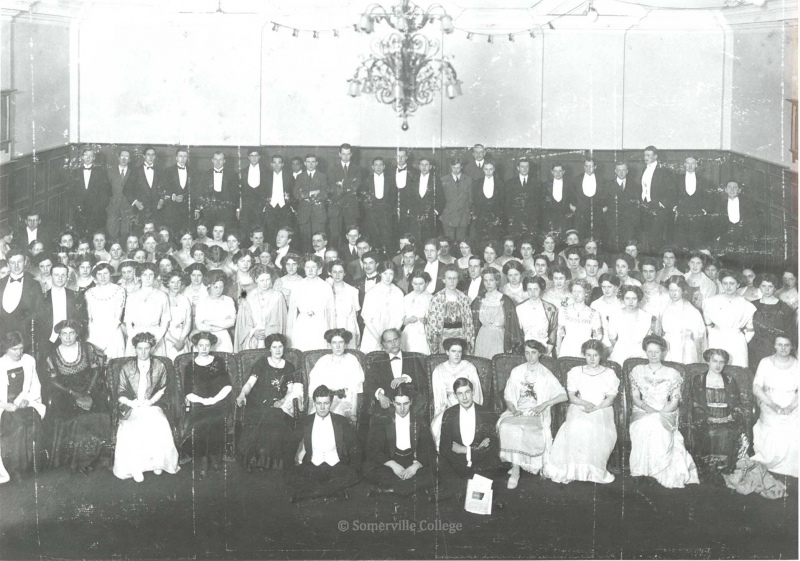 Debating, and particularly the discussion of political issues, had long been popular in Somerville. A women’s debating society was founded in 1882 and became the United Halls Debating Society (later the Oxford Students’ Debating Society, see February 1914 post) with the inclusion of members from Lady Margaret Hall and St. Hugh’s.  In the pre-war years, Somervillians were active in the suffrage movement and the Oxford Women Students’ Fabian Society. The college also had its renowned Parliamentary Debating Society, known as Parliament, which adhered closely to the Westminster template in both structure and content. However, during the war, fewer Parliaments were held ‘due to the party truce and to the elimination of all controversial matters from discussion’. In Hilary Term 1915, only one Parliament was held which discussed national service and in the Trinity Term, the subject under consideration was martial law. Future debates included ‘a Bill for the Industrial Conscription of Women’, ‘a Bill to Provide for the Training of Disabled Soldiers and Sailors’ and ‘a Bill for the Prohibition of Intoxicating Liquors’, reflecting the issues of the time on the home front. 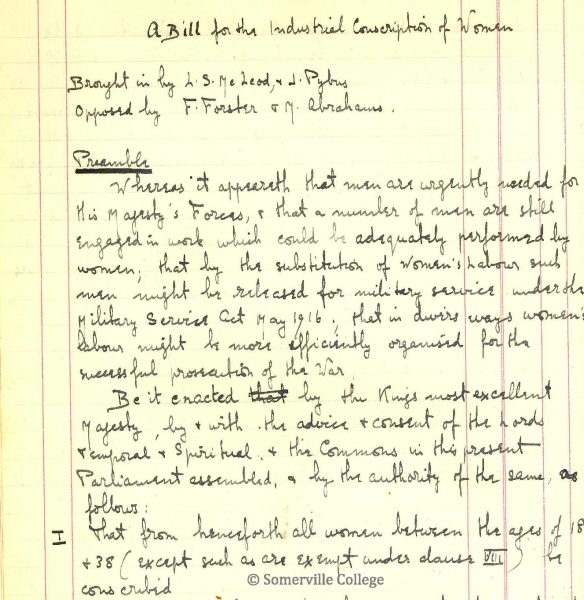 Another college club was the Tub Thumpers, a less formal society, established to enable members to practice before participating in Parliament. Three debates were held during the Hilary Term, on national service, the future of Alsace Lorraine and, on 19th February, ‘The Results of the Employment of Indian Troops in the War’, which was open to the public.  Somerville’s connection with India had begun in 1889 when Cornelia Sorabji matriculated to read law, becoming the first Indian woman to study at a British university.

(Cornelia Sorabji pictured left; by 1915 she had returned to the Himalayas and was working to establish rights and education for the Purdahnashins, informing them about the war via her vernacular War-letters and magic lantern shows). During the war, over one million Indian troops fought overseas, participating in the campaigns in Mesopotamia, Egypt, Gallipoli, East Africa and on the Western Front.  The Tub-Thumpers’ meeting had a “large attendance, and the ensuing debate was very interesting, creating, as it did, much discussion of the past and future of the British Empire” (The Fritillary, March 1915).

On occasion, discussion resulted in action. Following a lecture on the condition of the French Red Cross hospitals and their need for help and money, a College meeting was held where it was agreed that £25 should be raised in order to send the Fellow, Miss Ethel Jones, to France. The SCR provided funds so that she could undertake a month’s training at Guy’s Hospital first, after which she was to spend three months as an interpreter at the Anglo-American hospital at Yvetôt. She was joined there by the former librarian Miss Kempson, who was deployed before completing her training, so urgent was the need for help.

The Tub Thumpers continued to provide a popular forum for discussion until the latter years of the war despite, or perhaps because of, the fragmented nature of college life following the conversion of Somerville’s buildings into a military hospital during the 1915 Easter vacation.