‘The news of the Armistice reached Oxford soon after 11 am. This was the signal for an outburst of patriotic enthusiasm chiefly manifest in the ringing of the bells of Oxford, the display of the flags of the Allies from every available window (& thanks to the optimistic forethought of the Principal of Somerville the flags of St Mary Hall were among the first to decorate the High) and numerous gaily bedecked processions of townspeople, undergraduates and women students………’
Somerville College Log Book 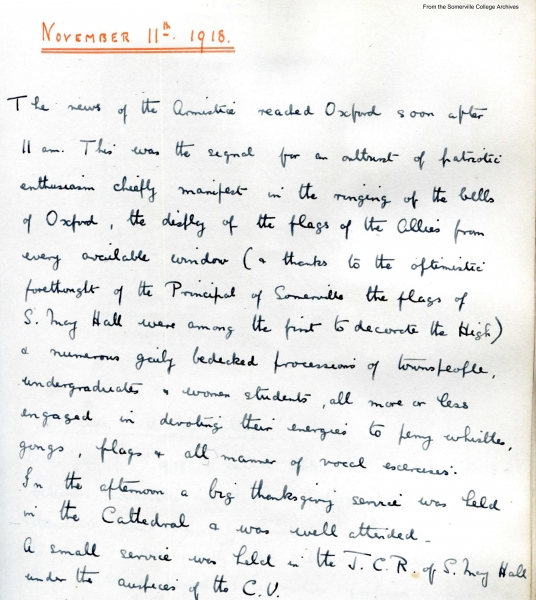 ‘The great event of my first term was the Armistice – the noise of rejoicing from crowds in the High was something the like of which I’d never heard. I was terrified and remained immured in my room, though several of my mates ventured forth, as I could see from my window on the quad.’
Reminiscences of Hilda Street

‘I didn’t have time to think what it meant – I was just caught up in a whirl of shouting, rejoicing people…..
In a little time I got in with a lot of Somerville people, and then more and more joined, and at the end of about half an hour the whole of college was parading in a body, like all the other colleges – Balliol had got hold of a 2-seater, on which I counted 20 people, with a man sitting on the bonnet playing the pipes in full blast! Of course the undergrads have all gone as mad a hatters. Chaperon rules were forgotten this morning! Girls and men marched together, laughing and shouting and waving all sorts and conditions of flags – it was tremendous fun, but all the time I didn’t know in the least what I was doing and what had happened. I’ve been sitting quietly in my room since lunch, thinking hard and trying to realise the glorious, wonderful meaning of it – and now I don’t want to shout or wave flags, it’s much too deep and solemn a joy. How can one be thankful enough.’
Letter home from Somerville student

‘Then came Armistice Day on 11th November 1918 in the midst of a frightful epidemic of influenza which mowed us down in Skimmery…..’
Vera Farnell, A Somervillian Looks Back (1948)

‘The Treasurer announced that he would not renew the Insurance against damage by aircraft.’
Council Minutes, 12th November 1918