The Somerville Council met twice in October 1918, an extraordinary meeting on the 8th, primarily to discuss Miss Lorimer’s leave of absence and again on October 22nd to conduct college business and the issues which had arisen over the summer vacation. The minutes of these meetings reveal the mixture of academic administration and wartime exigencies under consideration.

In October 1918, there were 109 students in residence. The Gilchrist Educational Trust decided to renew its three-year scholarship and those receiving other awards, offered by the college and the Girls’ Public Day School Trust, were noted. The Shaw Lefevre Scholarship was reallocated as the original recipient was leaving the college in January 1919 to be married. The minutes recorded discussions about the recruitment of academic staff (a temporary Classics tutor and replacement History tutor) and the reassignment of administrative duties. A request that the college take on a member of staff to liaise with Catholic schools and assist Catholic students was turned down, as it was inconsistent with the spirit of Somerville’s Articles of Association (the college was non-denominational from foundation and for many years did not even have a chapel).

The minutes also included an agreement to reduce the fees for a Belgian applicant, should she qualify for a place at college, on the grounds that she was a refugee. The Council further agreed to help in the education of Russian refugees, if necessary at reduced fees, if the Education Committee for Russia could recommend a suitable applicant.

The Council voted to remit the fees of a Miss Hollwey, who could not return to the college for the Michaelmas term, being unable to make the crossing from Ireland due to the submarine risks. A War Bonus was granted to ’all salaried Officers of the College’ for the 1917-18 academic year ‘in consideration of the great depreciation in the value of money’ with plans to make a similar grant in 1918-19. 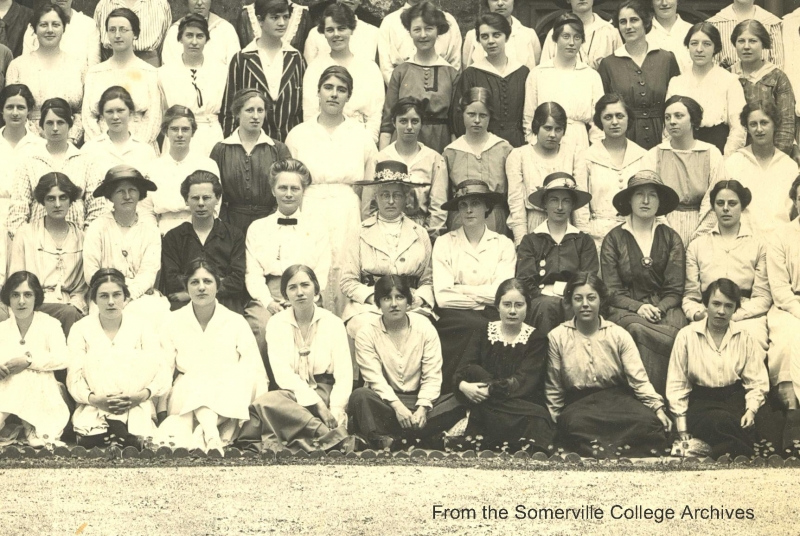 The student originally awarded the Shaw Lefevre Scholarship, Marie Turner, left Somerville as planned at the end of the year. She had already had four terms’ absence from college on war work (in the Women’s Land Army) yet had still achieved a Second in the Classics first examination in Hilary Term 1918, the term after her return. In Michaelmas Term 1920, she matriculated and sat the necessary additional examinations to enable her to qualify for a degree, taking her BA in Trinity Term 1921. Like Charis Barnett (see blog February 1918), she was granted the equivalent of two terms residence on the basis of her military service, enabling her to meet the degree requirements. There is no record of her marriage in the college register.