During the academic year, students had comparatively few opportunities to do war work as scholarly and college pursuits took up most of their time.

The college meetings, held by the JCR, did provide a chance to muster volunteers for war work during the long vacation, such as the Board of Agriculture scheme to supply farm labourers, discussed at the meeting in March. The minutes also recorded the war work students were able to do during the academic year.

A number of Somervillians travelled to Didcot each week to help at the Military Supply Depot, unpacking cases of hardware and china; the Oxford letter noted that although the journey to and fro took up a large part of the time, much useful work was done. The Suffrage Society made bandages for the Scottish Women’s Federation Hospital and many students did what they could to assist the Somerville Section hospital, providing magazines and stamps for the comforts table and wheeling out recovering soldiers in their bath chairs. 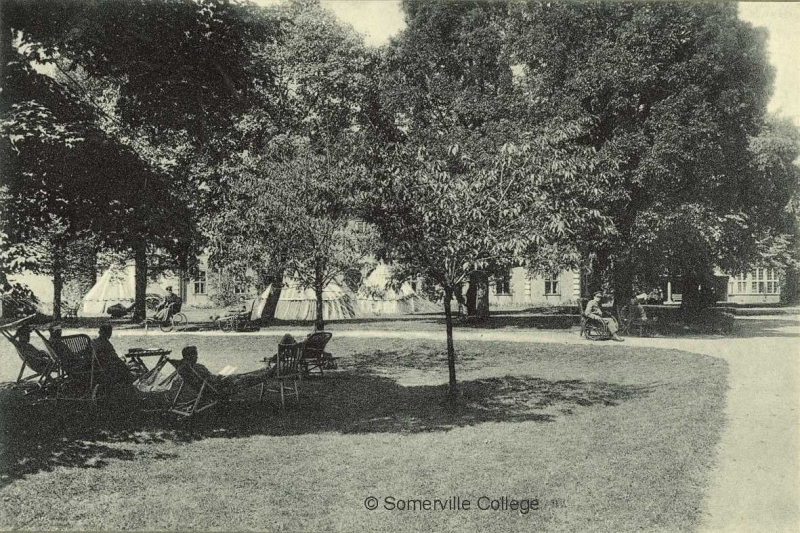 Somervillians also set up a working party, which met every Saturday evening throughout the winter of 1915-16, to sew for the hospital patients. Such groups were a popular way in which women (in particular) could do part-time war work in combination with their other commitments. Many work parties were established in response to appeals by the Red Cross or the St John’s Ambulance Association, who needed clothing for wounded servicemen, such as pyjamas and dressing gowns, shirts and socks. Sewing parties would raise funds to purchase the necessary fabric and the Red Cross would supply the patterns.

The Somerville sewing party was funded from the Sunday collection, with a grant of £4 (worth over £350 today) put aside to buy material. They did not need all of it and at the college meeting held on 6th March, the students debated what to do with the left-over money, agreeing to use it to buy clothes for soldiers being discharged from Somerville Hospital.

The SSA Annual Report later revealed that the work party had been able to send a ‘substantial parcel of socks and shirts’ to the Matron – with the help of the College maids! Somervillians also knitted socks for Russian prisoners of war, in response to an appeal made to Miss Penrose for the students’ help.

It had been decided that the funds from the Sunday collection should be used for Somerville Hospital, unless there was a special cause or the hospital did not need donations at that time. The collection was therefore put to a number of different uses included assisting a man left short of funds when the War Office miscalculated his pay, a contribution to the Serbian Relief Fund and a donation to the ‘Star and Garter building fund’, which was set up early in 1916 to pay for the conversion of an old hotel in Richmond into the first Star and Garter Home for Disabled Soldiers and Sailors.