Hilda Lorimer, Somerville’s Classics Tutor, was renowned as a scholar of Homeric archaeology. She had travelled extensively in Greece before the war and in 1917 she spent six months as an orderly with the Scottish Women’s Hospitals, in the Salonika campaign.

Her expert assistance was sought by the Foreign Office during the Long Vacation of 1918, to produce a series of handbooks on Greece and the Balkans. By the end of September, Miss Lorimer’s time with the F.O. was coming to an end and the F.O. approached Somerville’s Council to second her full-time to the Historical Section. The letter of request, written on 4 October, resulted in an extraordinary meeting of the Council a few days later, to discuss arrangements for Miss Lorimer’s absence and cover for her teaching commitments. Her services at the F.O. were requested for the duration of the war and, whilst the tide seemed to have turned in the conflict, the end of hostilities was not yet in sight. 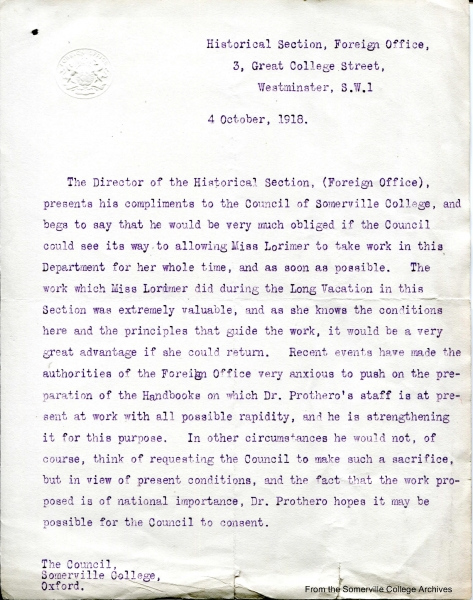 The Handbooks of the Historical Section, Foreign Office was a series of over 150 booklets prepared on different countries and regions of the world, in anticipation of the post-war peace conference. Preparation of the handbooks began in 1917 and their purpose was to provide information for delegates involved in the negotiations. The Near East series of 14 pamphlets covered the social, political and economic conditions in the region which included the Balkan states, Turkey, Greece, Albania, Romania and Bulgaria. Many of the handbooks were subsequently made available to the public in 1920. Hilda Lorimer worked on The Slovenes and The Yugoslav Movement.

The handbooks were not updated before publication in 1920, as explained in the introduction by G. W. Prothero, the former Director of the Historical Section; cost, time and the difficulty of providing an accurate and up to date account of an area in a state of flux post-war meant they were made available as originally produced. Hilda Lorimer subsequently contributed to Yugoslavia and The History of Serbia up to 1914, two volumes in the Nations of Today series, edited by John Buchan (author of the Thirty Nine Steps), which were published in 1923.