Regular readers of this blog will know how much it owes to the Somerville Students’ Association (SSA) annual reports of the period and, in particular, to the list of members and their war work, which was included in the report published in November 1917.
The original list was compiled for what would become the Imperial War Museum (see May 1917 blog). It recorded the range of work undertaken by this diverse group of women, linked by their membership of the college.

Teaching, nursing and welfare work in its many forms were the occupations most widely undertaken by members of the SSA. With huge numbers of women employed in munitions manufacturing, factories recruited Lady Superintendents and the Ministry employed welfare officers (Hilda Walton, Somerville’s former domestic bursar, was appointed Senior Welfare Officer Extra Mural by the Ministry of Munitions in 1917). Many, if not most of those on the list, changed roles as the war went on or did multiple jobs, for example teachers who worked in canteens or on the land during the long vacations.

The list also includes small but fascinating references to some of the more unusual forms of war work undertaken by women. SSA members were occupied in moss gathering, the woman patrols, as a ‘Lady Guide to overseas troops’, one was a factory carpenter and another the Corrector of the Press (at the Ebor Press in York). Perhaps most enterprising of all, a former English student called Augusta Cullis spent the war as an ambulance driver and, at the time the 1917 report went to press, was in France organising a touring concert party for the Soldiers’ Rest Camps. 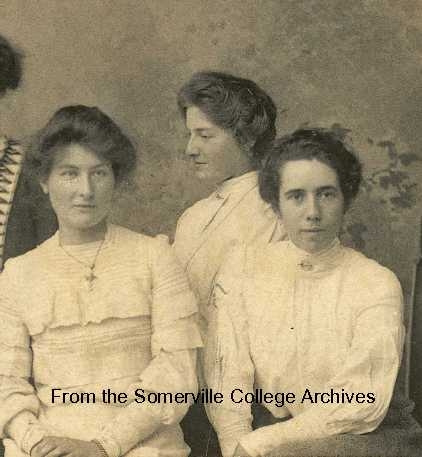 Mildred Augusta Cullis came up to Somerville in January 1904. On completing her studies in 1906, she trained as a teacher and pursued this career until the outbreak of war. In 1914, she enrolled as an ambulance driver with the French Army, driving in Amiens and Salonica.

The 1917 SSA annual report included a notice that she and a friend had initiated ‘special work’, welcomed by the authorities, to tour the hospitals and rest camps in three cars, giving concerts and providing instruction in handicrafts. The aim was to amuse and occupy the men, relieving the boredom and depression afflicting the French soldiers and there was an appeal for donations towards the cost of the cars.

We do not know if the fundraising was successful but the records show Augusta Cullis later returned to driving ambulances and, from 1918, worked in a bookshop for troops set up in Abbeville. After the war, she resumed teaching, working in HMP Holloway before becoming Resident Tutor at Bedford College, having changed her first names from Mildred Augusta to Mary Aeldrin.