“Somerville and Somervillians (though the number of resident students shows no diminution) have been greatly affected by the War, and may, it seems likely, be even more affected in the future.” Somerville Report 1915

In June 1915, the first academic year of the war ended.  It had been one of great change for Somerville, particularly in terms of location and cohesion, but wider-reaching and more fundamental changes were gradually taking place throughout the country. As the war continued, women were taking on roles, in the work place or as part of the war effort, which would previously have been closed to them because of their gender, class or education.

At Oxford, although not yet admitted to degrees, the first women were invited to give lectures in Trinity Term 1915.  Helen Darbishire, the English tutor (and Somerville’s future Principal), was the second woman to give a University lecture, and Vera Brittain described her subsequent lecture on Milton as ‘magnificent’.  As the war continued, female academics were invited (by some of their male colleagues) to do more teaching, even coaching a few male undergraduates. Moreover, some courses hitherto closed to women students started to become available to them, most notably perhaps in medicine.

Many students and fellows found it possible (and preferable) to combine war work with College life. However, some Somervillians decided to postpone or forsake their educations for national service.

In June 1915, Vera Brittain was one of six students who left temporarily and of these, only two actually returned to complete their studies,

Hilda Broadbent after one year and Vera herself, after the war had ended.  Agnes Murray, another of the six and the daughter of renowned Classicist Professor Gilbert Murray, left to spend two years nursing before serving as an RAF dispatch rider and as an ambulance driver for the FANY. At this stage of the war, the number of students interrupting their studies was comparatively low although it was to become a matter of some concern to the Principal, Emily Penrose, as the conflict continued. 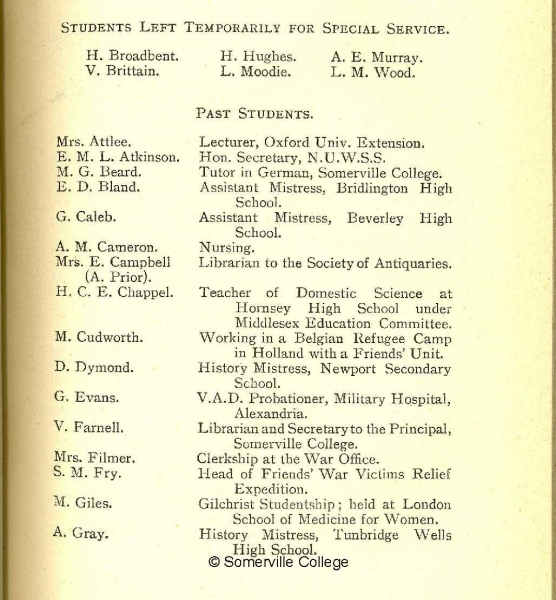 The Report also listed the occupations pursued by past students and the 1915 list included a substantial proportion of nurses, VAD probationers and medical administrators plus ward orderlies, a trainee masseuse and a couple of farm workers in addition to the more usual teachers, lecturers and librarians. For College staff, the war would offer unexpected opportunities too; the scout, May Drew, went on to nurse as a VAD at the Wingfield Hospital in Headington. After the war she attended Hillcroft, the Working Women’s College (established to offer further education to working women) thanks, she later wrote, to the influence of Miss Kempson, Somerville’s pre-war librarian.