‘Exactly a fortnight before the world as I had known it crashed into chaos, I went to Leek to take my Oxford Senior.’  Vera Brittain, Testament of Youth.

The long vacation in 1914 should have been a time of rest, recuperation and preparation for students and Fellows. Many of the Senior Common Room (SCR) used the vacations to travel and work on their own research. Undergraduates, forbidden to stay up, had no choice but to leave Oxford. However, for students hoping to come up in the autumn, July could be when they faced the final hurdle, as it was the last opportunity to take the examinations required for entry. 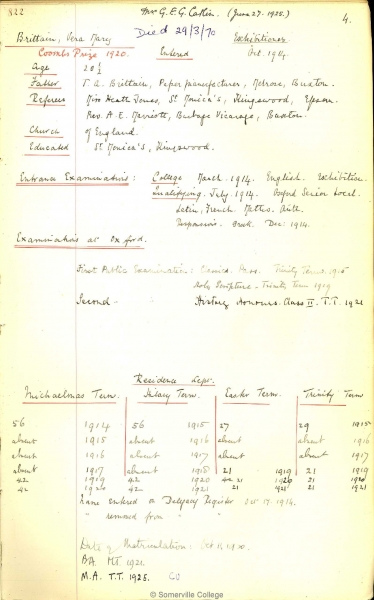 To obtain a place at College, candidates had to pass the entrance examination and demonstrate that they had reached the required standards in Latin, Ancient Greek and Mathematics. Many students had obtained qualifying examinations such as school leaving certificates, but for those wishing to take degree courses, it was necessary to pass Responsions, an examination set by the University of Oxford.

Almost one third of those who would come up in October 1914 sat Responsions that July whilst Vera Brittain sat the Oxford Senior Local “in the airless atmosphere of Leek Technical School” on July 20th. In passing this exam, she was able to confirm her place at Somerville but she had not escaped Responsions Greek and had to sit that examination at the end of her first term.

For the SCR, it was a summer fraught with interruption and uncertainty. Fellows who had intended to travel in August were forced to cancel their trips whilst those who left Oxford in July little imagined the difficulties they would face on the journey home.

Miss Phillpotts, who had become the first Lady Carlisle Research Fellow in 1913, became trapped in Iceland with the Bursar, Miss Walton, but luckily they ‘succeeded in catching a boat which dropped them at the Faroes, whence they embarked for Leith’. Miss Penrose, holidaying in Switzerland, had an ‘adventurous journey home, which included wheeling her luggage on a trolley for a couple of miles and making quite a triumphal progress through France in company with some other English in military trains’ (Somerville Students’ Association Annual Report 1914). She was able to return to Somerville in September but for other College members, the outbreak of war was to interrupt their studies and, in some cases, end their academic careers.