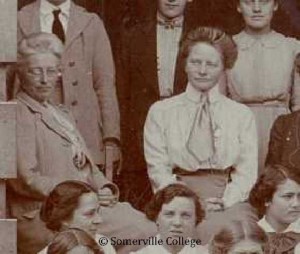 Between 1914 and 1915, over two hundred thousand Belgians were to flee to Britain and Oxford became one of many centres to offer accommodation and assistance to some of those refugees.

As well as the widely held public sympathy for Belgium’s plight, academics had been outraged by the German attack on Louvain in August 1914, during which the University library had been deliberately set ablaze, with the loss of thousands of medieval manuscripts and books. In October 1914, the mayor of Oxford welcomed two hundred refugees to the city and volunteers, including the Belgian Relief Committee, set about finding them lodgings and work.

Miss Pamela Bruce, sister of Somerville’s Vice Principal, Alice Bruce, organized the Committee and Somerville students assisted enthusiastically in its work. Many of the refugees were completely destitute – an October entry in Vera Brittain’s diary records going in to dinner with Miss Penrose, who was ‘somewhat amusing on the subject of helping Belgian refugees choose men’s underclothing’. The refugees also required accommodation, much of which was provided in private homes and lodgings, with undergraduates such as Dorothy L. Sayers assisting as translators. Ruskin College provided temporary accommodation for some of the Belgians and Somerville undergraduates supplied a bicycle messenger service to run errands and ‘make themselves generally useful during the afternoons’ (SSA Annual Report 1915). 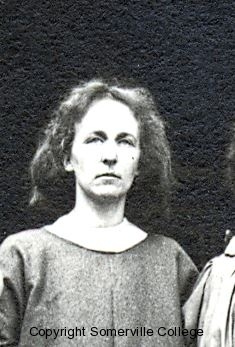 Grace Hadow, a Somervillian and English lecturer at Lady Margaret Hall, was also active in assisting Belgian refugees and, later in the war, was to use the skills and experience gained when she went to work for the Ministry of Munitions department of Extra-Mural Welfare, organizing housing and crêches for women factory workers.

On Saturday 7th November, a Belgian Day was held in Oxford for the benefit of those ‘ruined by the war’, as described by Vera Brittain in her diary. Everyone wore red, yellow and black favours and rosettes covered the shop windows as well as the persons and bicycles of the undergraduates. Senior members of the College, including Miss Penrose and Miss Bruce, had taken responsibility for separate Belgian families and on November 14th the students were given the opportunity to meet some of the ‘nation’s distinguished guests’ when the Principal and Staff were ‘At Home’ to the Belgians in Oxford. As the senior members of College entertained the adults to tea, the junior members provided games and refreshments for the children in the gym. After tea, there were displays of morris and country dancing in Maitland Hall and the evening ended with the singing of national anthems;

“our tentative effort to sing the Belgian National Anthem at the close of the afternoon was received with a touching applause for which we were quite unprepared” (SSA Annual Report 1915).