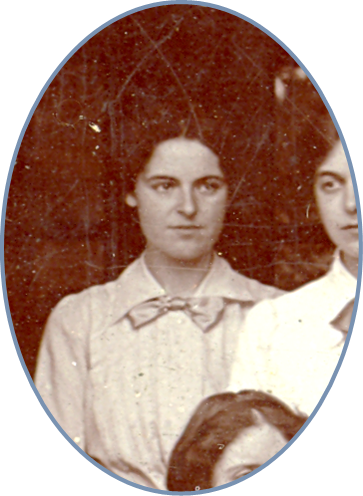 “I didn’t begin to write my speech for the O.S.D.S.* debate until Thursday morning, and I timed it to take exactly two minutes. I was the Proposer and the motion was, ‘That the reluctance of the modern woman to marry is a benefit to Society.’ I wore my white satin with the pink on it and, to my surprise, wasn’t the least bit nervous….”  Letter home from Charis Barnett, Somerville Student,  1 February 1914

In February 1914 Somerville College was a vibrant and thriving academic community as this extract from Charis Barnett’s letter shows.  Charis (pictured above) was a member of several societies and clubs both within the College and in the wider University.  Indeed she was a founder member of The Somerville Mutual Admiration Society (so called because everyone would have named it that,  if they hadn’t already!), an invitation-only writers circle to which the young Dorothy L Sayers also belonged.

Somerville was a relative newcomer amongst Oxford’s colleges, founded thirty five years earlier as Somerville Hall and located just outside the historic centre of the city, next to the Radcliffe Infirmary. In 1908 it had become the first of the Oxford women’s colleges to introduce an entrance examination. In 1912 it had been able to establish its first research fellowship thanks to an endowment from Rosalind Countess of Carlisle.

The Principal, Emily Penrose, was raising academic standards, encouraging students to take full degree courses even though the University had not yet admitted women to degrees. In 1879 the first intake of students numbered twelve; by February 1914 there were over one hundred in residence and they were able to enjoy Oxford undergraduate life, formerly the preserve of men, more widely than ever before.