Unique among Somervillians who volunteered to help the war effort was Muriel Reynolds, who had come up to read modern languages in 1901. She spent the early part of the war in Bristol, teaching Belgian refugees and working for the Red Cross but she also lived in Okehampton and is the only Somervillian on record as having been a herb and moss collector.

The vast number of casualties sustained in the First World War led to advances in the diagnosis and treatment of wounds, such as the use of x-rays, systems of triage and the introduction of blood transfusions. However, natural remedies also had their place in the medical arsenal particularly against sepsis in the era before antibiotics. Wounds were extremely susceptible to infection due to the muddy conditions of the trenches. Medics therefore turned to traditional herbs with antiseptic properties, such as calendula (or marigolds), rosemary, sage and lavender. They were used in dressings and treatments for wounds and in the preparation of disinfectants for cleaning wards.

Sphagnum moss was another natural resource and an effective alternative to cotton wool, which had to be imported and was also required for the manufacture of munitions. Sphagnum moss was exceptionally absorbent and naturally antiseptic and these properties were noticed by army surgeon Charles Walker Cathcart in Edinburgh, who used it in the manufacture of dressings from 1914. In February 1916, sphagnum moss was officially approved for military medical use and surgical dressings made in Edinburgh were supplied to service hospitals at home and abroad. Such was the demand that in September 1916, moss collection was publicised and promoted across the country. Dublin became another major centre of dressings production, with a smaller site established on Dartmoor near Princetown. 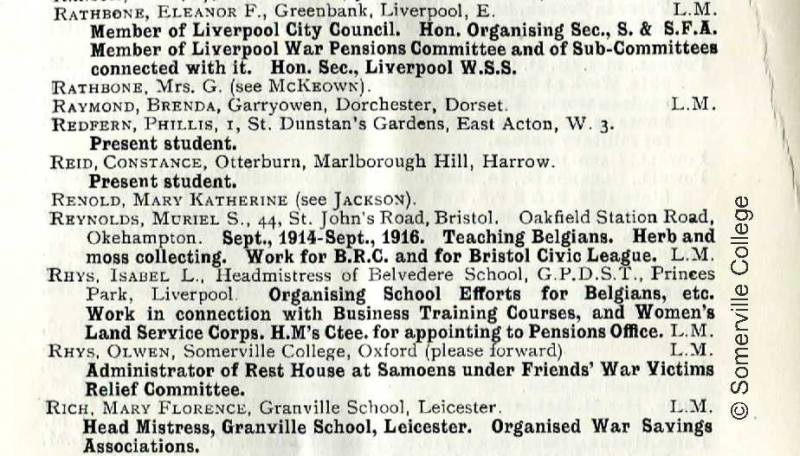 Volunteers such as Muriel Reynolds would collect the moss, roughly clean it, partly dry it and pack it into sacks to be taken to the depot, before it was fully cleaned, dried and transformed into dressings. One source in the college archives describes her war service as ‘land work’; we are fortunate that the Somerville Association of Senior Members compiled a comprehensive list of its members and the national service each undertook, to reveal this fascinating aspect of the war effort.