Members of Somerville, concerned that the migration to Oriel would undermine the coherence and traditions of the college (see blog Oct 1915), had their fears realised when some of the students abandoned procedure (and potentially propriety) via a petition seeking a relaxation of the college’s chaperone rules.

The chaperone rules had evolved gradually during the first three decades of Somerville’s existence. As female students were granted admittance to the same lectures as the men, it became necessary to have chaperones accompany them and chaperones were obligatory until 1893 for groups of women attending lectures. It was not until the outbreak of the Great War that female students were allowed to attend lectures independently. 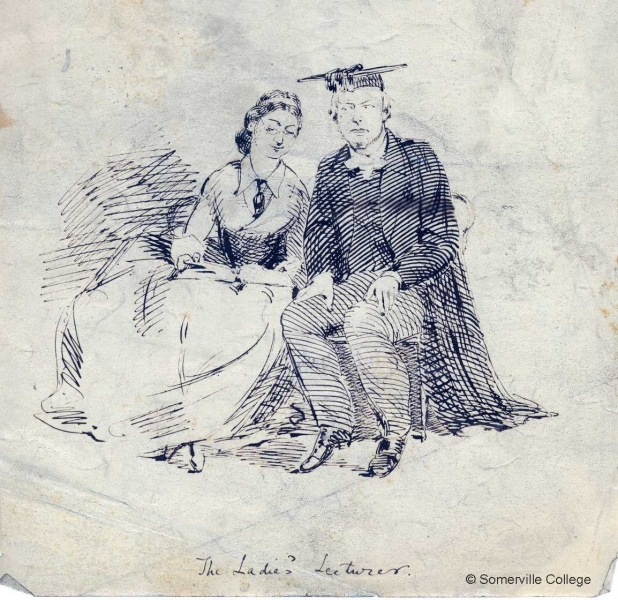 Emily Penrose on becoming Principal was acutely aware that the future of women at the University of Oxford depended on the conduct, both actual and perceived, of current students, writing in 1907, “We are anxious that new students…. realise how completely the reputation of the College passes into their hands. We have many privileges but no rights.” In 1907, even visits to brothers were chaperoned and by the time Vera Brittain went to Somerville, just seven years later, the ‘chap. rules’ still prevented her from visiting her brother Edward in his rooms and she had to clear her room of female friends should he drop by unexpectedly (he was in Oxford on an Officer Training Corps course for part of the Michaelmas term 1914).

In December 1915, some members of the JCR petitioned the College for a temporary relaxation of the rule for receiving gentlemen visitors – still chaperoned but allowed if the student had a separate sitting room. Whilst the content of the petition was of concern to senior members, the manner of its delivery was the JCR’s objection. Junior members of college held regular meetings, usually three per term, at which information could be communicated and requests reiterated – subjects such as noise reduction, the use of collected funds, war work or the need to economise over coal or electricity consumption were all noted in the minutes. Such meetings were also meant to be the channel through which students communicated with the College and were particularly useful in the light of Somerville’s fractured accommodation during the war. However, the minutes reveal the Senior Student’s frustration as notices were ignored, opportunities to vote on issues via the various college notice boards squandered (and drawing pins appropriated for unofficial use).

The petition circumvented procedure altogether, as it was sent directly to the Council without being passed first by the college meeting. 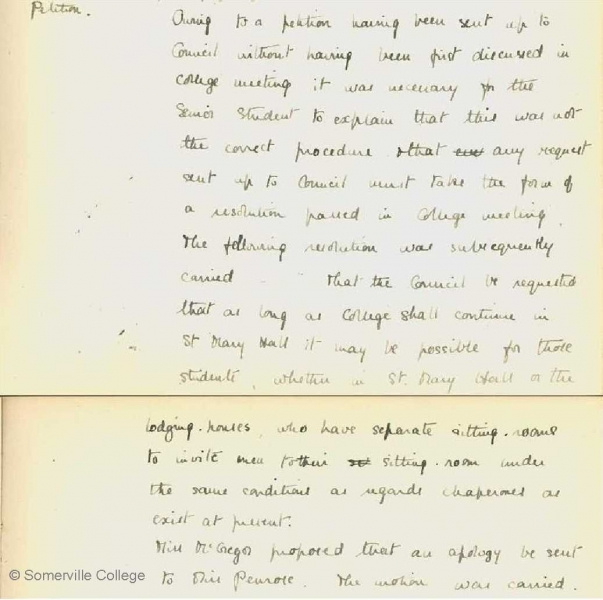 Council referred it to the Senior Student and at the next college meeting the matter was raised and an apology to Miss Penrose tabled. In February 1916, having gone through the proper channels, the petition was considered at Council and passed – only for the duration of the college’s residence at St Mary Hall. Miss Penrose and the Council were not prepared to allow a short-term gain to undermine their long-term aim, the admittance of women to membership of the university.