In November 1915, Ethel Kerr began her training at Armstrong-Whitworth’s in Newcastle to become a munitions worker or ‘munitionette’. She was one of a number of Somervillians, and hundreds of thousands of women, employed in munitions factories as a result of the Shell Crisis of 1915.

The inability of manufacturers to supply enough artillery ammunition led to Government intervention in the industry, with the creation of the Ministry of Munitions. The Munitions of War Act was also passed; under the Act, working conditions were closely controlled and wages regulated. The factories were forced to employ women, initially to supplement the remaining male workforce. Within two years, 80 per cent of munitions workers were women, receiving half the wage paid to their male counterparts.

Few women would have had any prior experience or instruction to equip them for such work. Ethel Kerr had read modern languages from 1896 to 1900 and had previously volunteered for the S & SFA (Soldiers & Sailors Family Association). However, she quickly progressed; after her initial training, she moved to the Woolwich Arsenal and in February 1916 she was appointed the Assistant Works Manager at the Scottish Filling Factory in Georgetown, Paisley. Dorothy Lyall had studied history and in 1915, she went to work in the Fuze Division of the Woolwich Arsenal, initially as a Fuze Examiner, then Forewoman and subsequently as the Deputy Assistant Inspector of Gun Ammunition.

Dorothy Arning, in contrast, was a chemist. A contemporary of Dorothy L. Sayers and Charis Barnett, on the completion of her 4 years at Somerville, she went to work at the No.21 National Filling Factory in Coventry where she became an Assistant Loading Chemist. 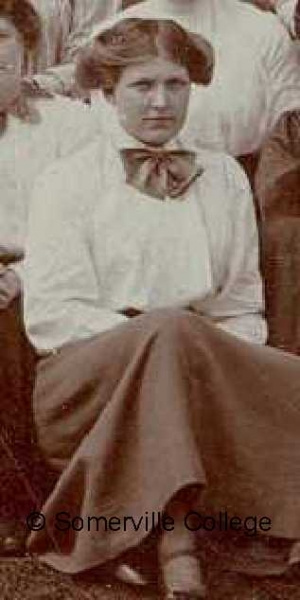 The hazards of working with such toxic materials required medical checks and a (rudimentary) workers welfare service and Nora Kessler, another Somerville historian, was employed as the Assistant Supervisor of the Women’s Welfare Department at National Ordnance Factory No. 2 in Hunslet in Leeds.

There are also records of Somervillians combining part-time work for munitions factories with their other commitments. Ursula Hopkyns, who was a training college lecturer, helped at the Army Ordnance Depot in Didcot in Oxfordshire during vacations.

Eleanor Powell, Somerville’s former Tutor in Modern History, spent six months working a Sunday shift in munitions during 1916, in addition to her committee work with the S & SFA, War Pensions Committee and Women’s University Settlement (WUS). Edel Moore combined her duties as head teacher with the role of agent for recruiting women munition workers in her district.

Kathleen Gardiner, a Somerville historian, joined the Ministry’s Record Department in 1917 to research its history.