By December 1916, the war had been underway for almost two and a half years. The cost to the countries involved was unprecedented, both in terms of the casualties and losses sustained and in terms of the money needed to finance the participants’ military machines.

Despite its huge wealth, with gold reserves and the resources of the Empire to call on, Britain’s finances were severely depleted. In an attempt to raise funds from the public, National War Savings Committees were established in April 1916 in England, Scotland, Wales and Ireland. Their aim was to encourage small savers, not usually regarded as a source of finance, to lend their money to the government. War Savings Associations were set up locally and posters extolling the patriotism of saving encouraged people to make their money serve their country. Some of these posters were aimed specifically at women and working men.

Somerville formed its own War Savings Association, with Miss Penrose as the Secretary and Miss Lorimer as the Treasurer. At the College Meeting on 7 December Somerville’s Senior Student, Kathleen Watson, exhibited a specimen ‘War Savings Christmas Card’. Such cards were marked with a grid inside, into which the sender or recipient could stick sixpenny savings stamps. Once completed, the cards held 31 stamps worth 15 shillings & 6d (77.5 p). The card could then be exchanged for a war savings certificate (or, if incomplete, paid into the owner’s War Savings Account) and after 5 years the certificate could be redeemed for £1.

The Senior Student suggested the cards would be a convenient way for students to accumulate their subscriptions during the vacation; in that month’s edition of The Fritillary, the War Savings Association was described as flourishing, with over 80 members and having already purchased several certificates. Miss Penrose had also been invited to address the students of St Hugh’s on the aims and administration of the Association and St Hugh’s had formed its own committee.

The Oxford Letter a few months later, in the 1917 Somerville Students Association annual report, suggests that for some the initial enthusiasm might have waned:

“The Somerville War Savings Association flourishes……. The domestic staff have shown a keenness which might well be emulated by some of the slacker student members.”

Somerville’s Parliament, in its debates, endeavoured to examine the issues under consideration by the national Parliament,

although limited to just two meetings per term and with far fewer members in attendance.

The meeting held in November 1916 produced a fierce debate on ‘a measure for the introduction of Universal Suffrage in Great Britain’.

The choice of subject was no doubt inspired by the Conference on Electoral Reform, then in session and chaired by the Speaker of the House of Commons. It was reviewing changes to the franchise for male voters, the residence requirements denying the vote to many of the men

away on active service, and considering the introduction of limited voting rights for women.

Somervillians had long supported the cause of women’s suffrage – with a few notable exceptions such as Mrs. Humphry Ward, one of the college’s founding members. Eighty per cent of the students were members of the Somerville Women’s Suffrage Society in 1910; in 1911 the women’s colleges combined to form the Oxford Women Student’s Society for Women’s Suffrage (OWSSWS) and their campaigning drew national attention. Even Emily Penrose, usually so cautious over any actions which could derail the progress towards degrees for women, permitted the Suffrage Society to hold their meetings in Somerville in the years immediately preceding the war (losing scholarship funding and  college supporters in the process).

During the war, the activities of the Suffrage Society extended beyond rolling bandages on a Sunday evening. Most notable, perhaps, was Shenberrow Camp, the survival training camp for Belgian relief workers (see August 1915 blog).  The OWSSWS also participated in the relief work and fundraising organised by the National Union of Women’s Suffrage Societies across the country.

At the University of Oxford, the war had resulted in a greater reliance on the contribution of women, both academically and financially. Nationally, the inclusion of women in the workforce and their vital war work had a similarly positive effect, persuading people of their fitness to vote. It therefore seems somewhat ironic that, at a time when public opinion was changing to support the extension of the franchise, Somerville’s Parliament voted against universal suffrage, by a small majority! 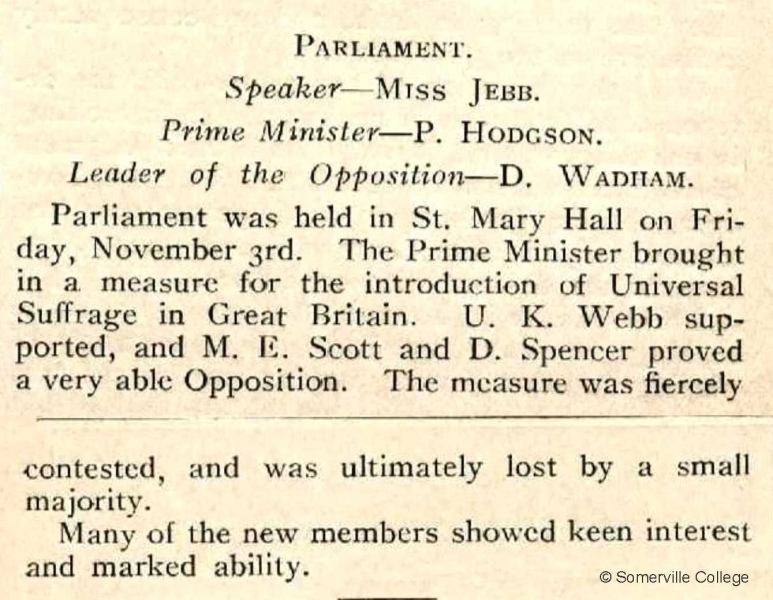