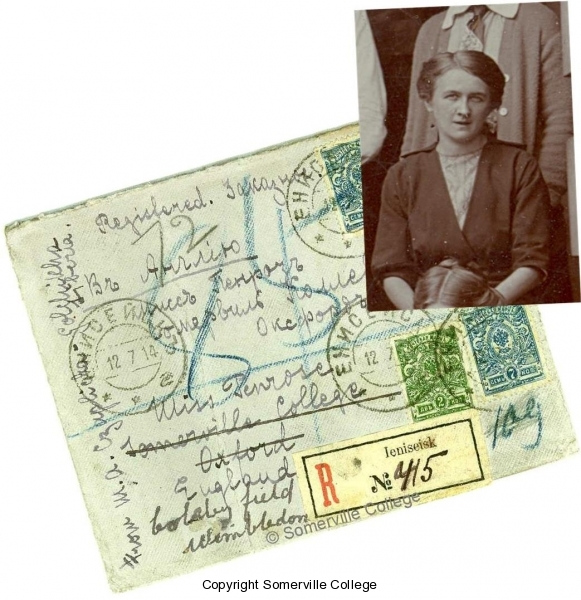 On 9th May 1914, the Polish anthropologist and Somerville student Marya Czaplicka applied for funds for an expedition to Siberia.

Marya Czaplicka had arrived in England in 1911 to take the diploma course in anthropology at Somerville. Intelligent and charming, she was a mature student and accomplished scholar. Speaking Russian in addition to Polish and English, she was uniquely placed to study the social anthropology of Northern Asia, her subject being shamanism in the tribes of Siberia. However, a perpetual shortage of funds posed a recurring threat to her academic career; on this occasion, the financial backing for an expedition, due to depart before the month’s end, had failed to materialize.

The Trustees of the Mary Ewart Fund met in Somerville on 18th May and a grant of two hundred pounds was awarded. Half of it was advanced personally by the trustee Mrs T.H. Green and credited to Miss Czaplicka at the Russian Bank for Foreign Trade in London. This enabled the expedition to depart as planned just three days later. Miss Czaplicka explained the urgency of the situation in her application which is held in the College archives. An early departure was vital as the party had to get to the Siberian city of Krasnoyarsk and thence along the Yenisei River to its mouth in time for the final breaking up of the ice. Their communications would depend on the river and it was only open for five months of the year at most.

Once underway, Marya Czaplicka wrote to Somerville’s Principal, Emily Penrose, “My best address for the present will be c/o [the]Norwegian Consulate who will send any letters to me which may arrive before the middle of August but from that date I shall be isolated from the world.” Unaware that war had been declared, Miss Czaplicka was to find herself once again in financial straits when transferred funds went astray in the confusion. As the minutes of the next Trustee meeting noted succinctly, ‘the outbreak of war had complicated matters.’