In April 1918, Vera Brittain returned from France to London.

She had been posted to the No. 24 General Hospital at Étaples in August 1917. It was close to the front and frantically busy and by April 1918 the German spring offensive meant every experienced VAD working there was a vital resource. However, the years of worry and shortages on the home front had taken their toll on Mr and Mrs Brittain: Vera’s mother had had a nervous collapse and entered a nursing home while her father had moved into a hotel. Mr Brittain wrote to demand that their only daughter fulfil her filial duty and return to help her parents. 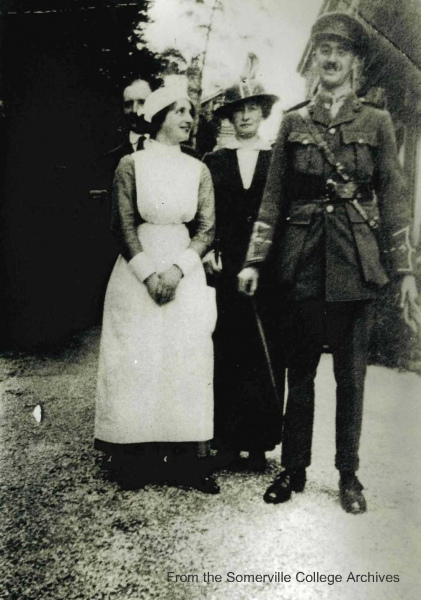 To leave Étaples meant breaking her contract with the Red Cross, and the possibility of no future postings overseas. Writing of her return to London in Testament of Youth, Brittain recorded feeling a traitor to her patients and fellow nurses as she began to contemplate returning to university before the end of the war. A temporary leave of absence had been her original plan and the Somerville Council minutes of 15 June 1915 recorded her intention to suspend her studies for just one year. However, in the months following the death of her fiancé Roland Leighton, she realised that she could not give up nursing until the war had ended. In March 1916, Brittain had visited Somerville to discuss extending her leave of absence from college with the Principal Emily Penrose.

In April 1918, altered circumstances again led Vera Brittain to consider returning to Somerville. In a meeting on 7 May 1918, the college Council resolved that she should “receive for the next two years the exhibition which had previously been suspended for three years.” A letter from her brother Edward, written on 24th May, reflected her misgivings about this course of action. “I quite expected you would find Oxford rather an annoying and unsatisfactory place just now, but I think you are doing the best thing to go up again in October as one must think a bit of the future when you are in a position to be able to do so.”

Whether proximity to her parents or the repercussions of her broken contract had inspired this change of course, a resumption of her studies was under consideration. However, by early June, she had determined to return to nursing and offered to resign her exhibition. The college decided to extend her leave of absence for another year.

On 15 June 1918, Vera Brittain’s brother Edward was killed in Italy. She resumed nursing that September in London and it was not until Trinity Term 1919 that she recommenced her academic life at Somerville. The following term, she was joined by the only other Somervillian to return to college from active service after the war’s end, Winifred Holtby.