By January 1916, Vera Brittain had been nursing for six months. After her initial Red Cross training at home in Buxton, she had been posted to the 1st London General Hospital in Camberwell as a Voluntary Aid Detachment nurse (VAD). The death of her fiancé, Roland Leighton, in December 1915, brought about a profound alteration in her attitude; having previously sought out all the most onerous tasks, “Camberwell, and its demands had come to seem unspeakably hateful” (Testament of Youth, Chapter VI). However, over the following weeks, she also came to realise that she could not return to Somerville after a year’s leave of absence, as she had originally planned, whilst all those she loved “were sacrificing everything that they cared for in the world”.

Vera Brittain was one of 90,000 volunteers who joined the Red Cross Voluntary Aid Detachments during the First World War. Many of the women who volunteered became nurses and from February 1915, VADs were permitted to work in military hospitals, assisting the members of the Royal Army Medical Corps.  From September 1915, the VAD ‘general service’ section supplied women to replace men of fighting age working in military hospitals in non-medical roles, such as dispensers, stores staff, cooks and clerks. Auxiliary hospitals, established for the care of convalescents, were organised and staffed by the Red Cross, and work parties were set up to make bandages and hospital clothing. For women who were unable to undertake full-time war work, there were many part-time roles available.

Somervillian volunteers included Alice Bruce, the Vice Principal, who was a member of the VAD Joint Committee and Selection Board, working at their London headquarters, Devonshire House, during the vacations. 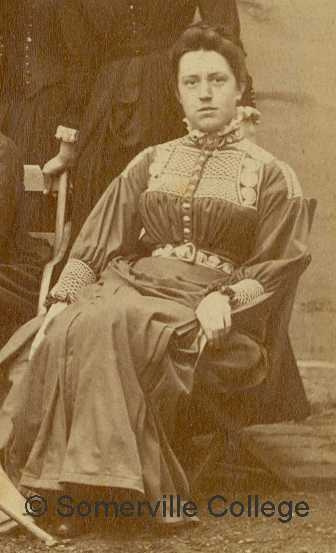 Lilian Faithfull, the Principal of Cheltenham Ladies’ College, was also the Commandant of its VAD Hospital and Organiser of its War Workshop.

Elizabeth Powell was the Commandant and Administrator of the Red Cross hospital based in her own house and Anne Muncaster became Commandant of the Cumberland VAD and was Quartermaster of the Worsley Hall Auxiliary Hospital as well as serving on the VAD Selection Board in Devonshire House. Her book On Quartermasters was hailed as a practical guide for those wishing to volunteer but with “no flaire for nursing” (SSA Annual Report, 1915).

Many other Somervillians served as VAD nurses and hospital workers such as clerks, orderlies and cooks, and as a consequence of their vacation work in VAD hospitals, at least two (Muriel Buckley and Florence Hodges) went on to medical school.