1915 was to be a year of momentous change for Somerville College.

Unlike the men’s colleges, life in Somerville had been largely unaffected during the first five months of the war, but by Hilary Term of 1915, the War Office was starting to cast covetous eyes on Somerville’s buildings which conveniently abutted the Radcliffe Infirmary.  For the time being, however, things carried on as normal. In January, Vera Brittain returned to college, to be congratulated on her “brilliant performance” in Responsions Greek by Miss Penrose and to continue her studies in the Pass Mods. Class and the SCR welcomed Madeline Giles as the new librarian. Beyond the college, Somervillians were contributing to the war effort in increasing numbers and in a variety of roles, including Dorothea Maude, stationed at a Royal Army Medical Corps hospital in France, the only female doctor with the R.A.M.C. at that time. 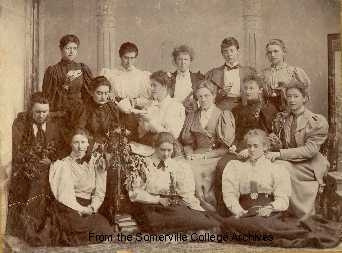 Women Scientists c.1896, each holding a symbol of her subject. Dorothea Maude began her studies just two years after this photograph was taken.

Dorothea Maude had gone up to Somerville in 1898 and had taken a first in Natural Sciences (Physiology) in 1902 before going on to train at the London Royal Free Hospital School of Medicine for Women. At the outbreak of the war, she had given up her Oxford practice and joined a British Field Hospital in Antwerp. Evacuated in the face of the German army advance, the medics had accompanied the wounded back to England; shortly thereafter, Dr. Maude left for France, joining Major Steadman’s R.A.M.C. hospital at Calais as an anaesthetist. She served in France until June 1915, latterly at Dunkirk where she and her uncle, Alwyne Maude, established the first Maude Hospital.

Dorothea Maude went on to work for the Serbian Relief Fund as an anaesthetist and surgeon and in 1916 assisted her uncle with the second Maude Hospital in Corfu, caring for sick and wounded Serb exiles. Her final posting of the war was to Salonika in 1916-1917, where she worked under the ‘Wounded Allies Relief Fund’ and opened a third hospital. Between postings, she returned to Oxford and private practice.

Despite the negative responses to their offers of help, ranging from incredulity to hostility, pioneering women medics such as Dr. Maude found ways in which they could use their skills and expertise to treat the sick and wounded during the war. Accepted more readily by the French and Belgian authorities, some female physicians inadvertently proved their worth to the War Office; for example, Drs. Flora Murray and Louisa Garrett Anderson founded the Women’s Hospital Corps in 1914, setting up two hospitals for the French Red Cross before, in 1915, establishing the Endell Street Military Hospital near Covent Garden at the request of the Director General of the Army Medical Services.

Madeline Giles was to spend only two terms as Somerville’s librarian before she, too, left the college to help “supply the pressing need for more doctors by training at the London School of Medicine” (SSA Annual Report 1915), a need which would only increase as, by 1916, the War Office was employing women doctors as part-time Civil Medical Practitioners and as civilian officers serving abroad on annual contracts.