‘.. if the War Office would welcome the use of Somerville for wounded, and if we can find some suitable place in which we could accommodate the college for a time, we ought to be patriotic.’   Miss Penrose to Mr Gillett, 20th February 1915

On 27th March 1915, Somerville was approached by a sanitary inspector, Mr. Best, who asked leave, under confidential instructions, to take some measurements in the college.

Such a request was not a surprise to the college authorities: Somerville’s proximity to the Radcliffe Infirmary, its size and the accommodation it offered made the college an obvious candidate for use as a military hospital. Anticipating requisition, the Principal, Emily Penrose and the Treasurer, Mr Gillett, were already considering alternative accommodation.  Mr Gillett had ‘sounded out’ the Provost of Oriel unofficially with a view to housing some, if not all, of Somerville’s students there. However, even with such foresight, the official request to requisition the college resulted in three weeks of frenetic activity and negotiations so that Somerville College could vacate the Woodstock Road site, lease it to the War Office and move premises, all within the Easter vacation.

On 28th March, Colonel Ranking, the Administrator of the 3rd Southern General Hospital,

made a full inspection of the college, writing to Miss Penrose ‘on the spot’ to say that he would be recommending Somerville’s use, as an Auxiliary War Hospital, to the authorities. If the college agreed, it would have to give not only its consent but “at the same time state a definite inclusive sum as rent which should cover rates, taxes and insurance.”  The deadline was 7pm on March 29th.  The Treasurer’s letter in reply on the 29th made provision for every circumstance including damage to the lawns and daytime access to the library for the librarian.

The accommodation on offer was St. Mary Hall Quadrangle, which had previously been a separate college, and was therefore easily separable from the rest of Oriel. It was largely unoccupied, as the majority of Oriel’s undergraduates had enlisted. However, it was too small, and it would be necessary to find accommodation for half of Somerville’s students elsewhere.

On 30th March, a formal agreement was reached. Somerville was to lease Skimmery (as St Mary’s was familiarly known) for the duration of the war and at least three months afterwards, paying rent plus the costs of structural alterations and damages, utilities and a fee towards the use of the furniture left in the occupied rooms.

The College then had only two weeks in which to vacate the Woodstock Road site and move to their new premises whilst doing all they could to ensure the safe keeping of the old. Huge quantities of Somervillians’ belongings had to be transported, a new kitchen had to be constructed at Oriel and, not least, the students had to be notified of this dramatic change, all before the end of the Easter Vacation. 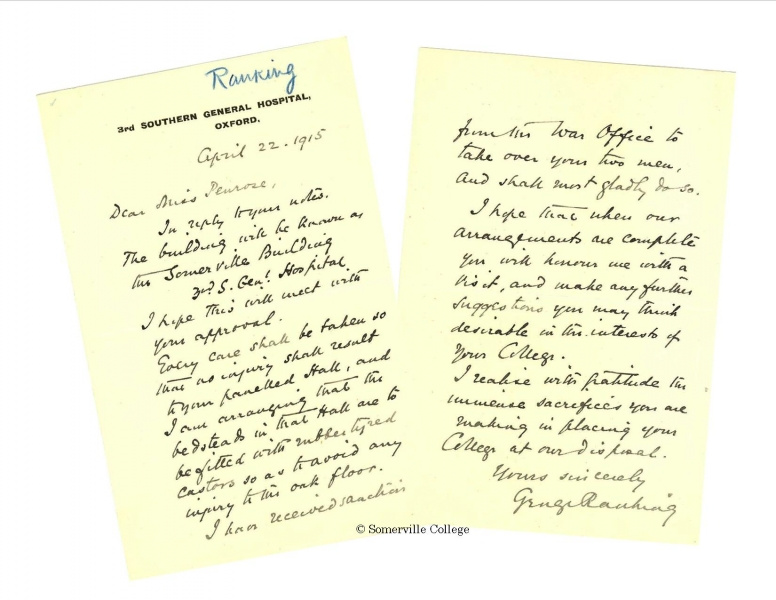