“It is impossible to allude even casually to the migration, without mentioning the almost miraculous speed and efficiency with which the move was effected, thanks to the untiring labours of Miss Penrose and Miss Walton and the splendid co-operation of the College maids.”  Oxford Letter, SSA Annual Report 1915 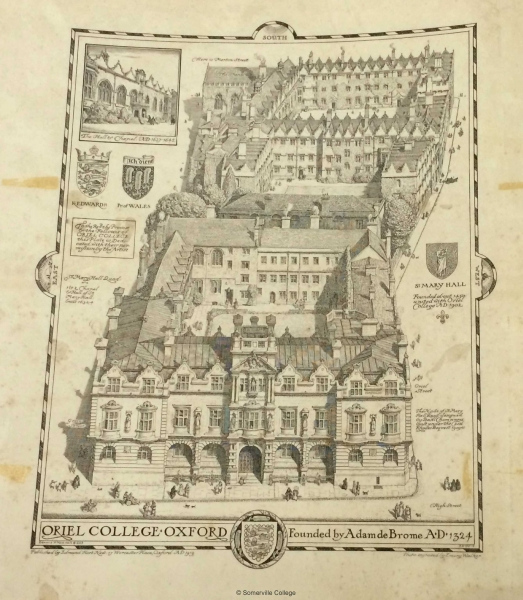 The move was hailed as a triumph of organisation. A letter was sent to all the students during the Easter holiday informing them of the situation and which rooms they would occupy on their return. Fears about unsociable neighbours were allayed when returning students discovered that rooms had been allocated with as much tact and consideration as the circumstances allowed. “Obviously harmonious pairs were found sharing the best sitting rooms, while the ‘worse-tempered’ had to pay (in space and light) for solitude.”

The romance of their medieval accommodation did not fully compensate for the loss of Somerville’s modern conveniences, such as broad staircases, lifts, pantries, gas-rings and corridors. College maid May Drew later recalled following Miss Walton around with a notebook recording what was to go where – and always felt she was blamed when the hall clock could not be found on the return to Woodstock Road! Otherwise it appears that the move was accomplished with barely a breakage or a loss and students moving into their new rooms were cheered by the sight of their own possessions.

With half the College in Skimmery, the remainder were boarded out at lodging houses. Vera Brittain, already planning to suspend her studies in order to nurse, was accommodated in Micklem Hall with six other people under Miss Darbishire. She described the society as “not exactly enlivening” but giving her the opportunity to become better acquainted with her tutor. Less appealing was the possibility of spiders and beetles hiding in the curtains and corners of her room. Each outpost had merits; Micklem Hall its panelling and garden, a waiter in the Turl, the Third Year scientists unsupervised in Merton Street and the two houses in King Edward Street, which were particularly noted for their cheerfulness (probably because of the excellent food), were nicknamed the Girls’ Friendly Society.

The first dinner of term was strange but a link to the past was provided by the appearance of the ‘familiar college soup’. After dinner, the Principal addressed the college: “She intimated that people were vaguely expecting us to do something unsuitable – she wasn’t sure quite what, but anyhow she was sure we wouldn’t do it….”

As Somerville settled into its new accommodation and the academic rigours of Trinity Term began, College members were proud and relieved that it had been possible to serve their country in this way. Vera Brittain was not alone in questioning the value of scholarly pursuits at this time and the SSA Annual Report noted “no one can deny that the buildings at least are fulfilling a really useful purpose in the war effort.”