“It is impossible even in writing a college letter to pass over in silence the subject which is filling everyone’s mind. In Oxford we are reminded at every turn of the greater happenings…”

Initially, the outbreak of war had comparatively little impact on Somerville College; the long vacation was drawing to a close and by September preparations were underway for the beginning of the new academic year. 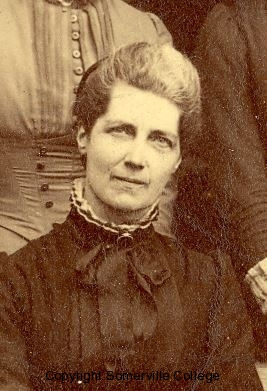 Madeleine Shaw Lefevre (pictured right), the College’s first principal, died on 19th September and plans were made for a memorial. Miss Ethel Jones, the Mary Somerville Research Fellow, had to abandon her research trip to Munich and Vienna but was able to continue her work at the British Museum instead.

However, changes were taking place in Oxford as the University city came increasingly to resemble a garrison town. Soldiers were quartered in empty colleges, an army hospital (the 3rd Southern General) had taken over the Examination Schools and New College garden was used as a recreation ground for the wounded. The town hall had become a centre for the ‘knitting and shirt-making industry’.

“It will be a strange term for freshers and a difficult term for everyone; but once started, the routine of work, untempered by many of the usual distractions, will probably prove a welcome aid towards maintaining a sane mind which must be the chief contribution that non-combatants can make to the country.”

Many Somervillians chose to contribute more directly to the national cause. Miss Pamela Bruce, the sister of the Vice-Principal, Alice Bruce, established the Belgian Refugee Committee in Oxford; both the Misses Bruce, together with returning undergraduates, worked to resettle and assist the newly arrived refugees once term began. Dr. Dorothea Maude gave up her Oxford practice to join a British Field Hospital under the Belgian Red Cross on September 7th. She spent part of her time in the base hospital in Antwerp and part of her time at the front, often under fire.

The College’s first contribution to the war effort was to provide bedsteads and mattresses to the 3rd Southern General Hospital, when the Administrator, Lt. Col. George Ranking, received an order to increase the hospital’s capacity to 1,000 beds. Within months, Lt. Col. Ranking was to approach Somerville with a request for further assistance which would provide a war-time role for the College’s buildings if not its members.