On 1st January 1918, the Principal of Somerville College Emily Penrose was appointed an Officer of the Order of the British Empire (OBE). She received it in recognition of her work on the National Register, undertaken in 1915 with, it was reported in the press, unique efficiency (see August 1915 blog). In organising the registration in Oxford, Emily Penrose had used the abilities which characterised her academic career and helped achieve the admission of women to degrees at Oxford.

Emily Penrose had been a student at Somerville College from 1889 to 1892, the first woman to achieve a First in Greats (Classics). Appointed Principal in 1907, she did comparatively little teaching, instead employing her very considerable intellect and administrative skills to improve the standing of women in academia, beginning with her own college. Under her leadership, Somerville became the first of the women’s colleges in Oxford to introduce an entrance examination. Students were encouraged to take degree courses, and observe all other associated qualifications; as a result, over 300 former Somerville students were eligible to receive degrees when women were admitted in October 1920. Somerville was the first of the Oxford women’s colleges to attract an endowment for a research fellowship, awarded in 1913 to Bertha Phillpotts (who also received an OBE in 1918; see June 1917 blog).

The beginning of 1918 ushered in a period of momentous change for the country and for women. As the Great War entered its final months, the contributions of those who had served the nation on all fronts and in all capacities began to be recognised. Acts of Parliament in 1918 and 1919 extended the franchise to include some women for the first time and removed the gender bar to the professions. Via a statute in 1920, the University of Oxford admitted women to degrees, a decision which was the culmination of years of work by many people. It was also made in recognition of the role played by the women’s colleges in sustaining the University through the war and reflected the political changes occurring nationally. It was felt that the terms of the statute owed much to Emily Penrose. 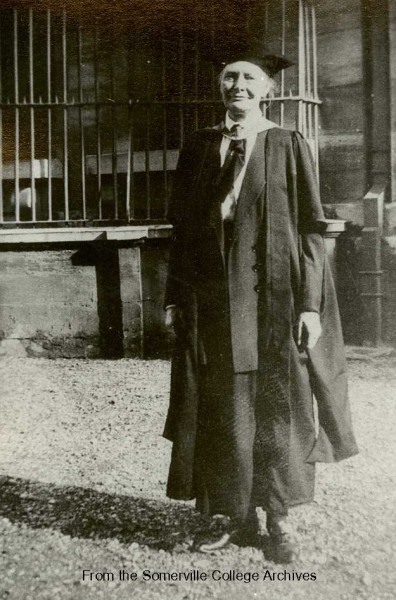 On her retirement in 1926, Emily Penrose became the second women to receive an honorary DCL (Doctor of Civil Law) from the University of Oxford – the first recipient being Queen Mary in 1921 – and in 1927 she was made a DBE (Dame of the British Empire) for services to education. The Medievalist Helen Waddell expressed the view of many Somervillians when she wrote “we feel it was you who made it inevitable that women should be recognised by the University”.