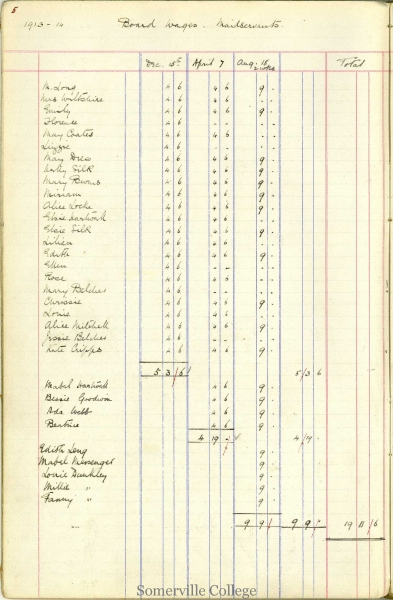 ‘He had served the College for twelve and a half years with fidelity and real affection; and it was a pleasure to both Staff and Students to be able to express their appreciation of his faithful service and that of his wife in the form of presents to them for their new house in Ferry Hinksey Road: a clock and a teapot, cream jug and sugar bowl.’ Somerville Students’ Association Annual Report, 1914

In April 1914, Somerville’s logbook recorded the retirement of the College porter, Scroggs, due to ill health. His importance in the Somerville community is clear from the reactions of staff, alumnae and students alike; a JCR fund-raising committee was elected and both Mr and Mrs Scroggs were ‘overjoyed’ with the clock presented to them by the students.

This affectionate treatment of Scroggs highlights the importance of domestic staff in College life. Known as ‘servants’, the wages book tells us that there were actually very few male employees, just two in addition to the porter, compared to a minimum of 23 ‘maidservants’ (scouts) who often lived in College and six women who came in to work on a daily basis.  The work that scouts performed was varied, as later described in a song called the ‘Scouts’ Chorus’ (from the 1925 Going-Down Play), with duties including sweeping, dusting, polishing boots and clearing out fires in the morning. They also served students’ meals – the ‘Scouts Chorus’ complained about latecomers, who made it difficult to keep the coffee hot! The contribution made by domestic staff to College life is reflected in Charis Barnett’s letters where she recounted Scroggs’ illness and described being nursed herself by a ‘marvel’, Nellie, during a bout of flu.

Former scout, May Drew, who started working at Somerville in 1911, aged 15, remembered the College with   affection in a letter some sixty-five years later, remarking that despite long hours (from 7 am until 10 pm), the maidservants, under a kindly housekeeper, were a ‘happy crowd’. The changes wrought by the war saw their number gradually diminish and Payne, Scroggs’ successor, was to enjoy only a brief interlude as College porter before his career was interrupted by war work.  Fortunately he was able to return to Somerville in 1919 and worked for the College for a further 27 years before retiring.