‘The hall proved ideal for dancing: the floor was all that could be desired.’          Somerville College Log Book, June 1914 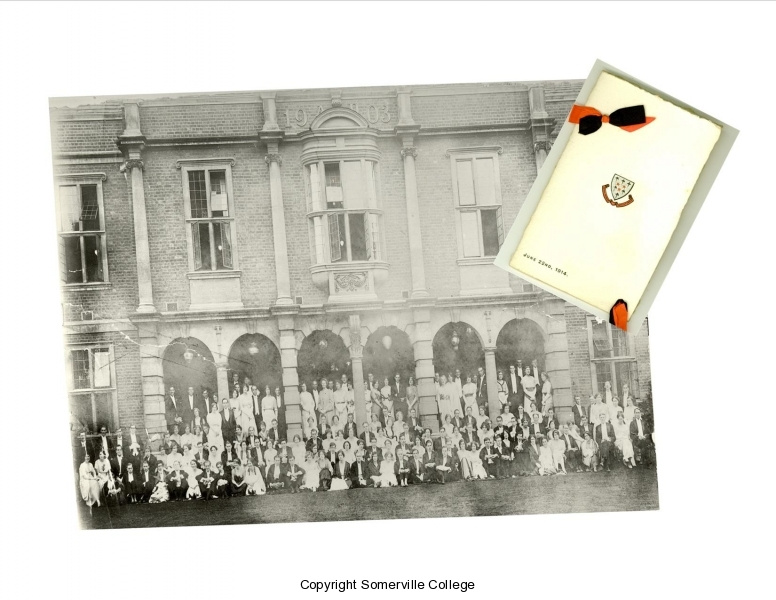 Commemoration Week, the week after the end of Trinity Term, is a traditional time for balls in Oxford, and in 1914 Somerville held a Commemoration Dance in its new hall. The JCR sought permission for an end of term dance from the Council in October 1913, soon after the hall’s official opening. With too little time until the end of Michaelmas and the end of Hilary Term coinciding with Lent, it was decided to hold the dance in Commemoration Week and, to avoid clashes with that year’s Gaudy and the New College ball, on a Monday, 22nd June.

A committee was formed and spent the next eight months preparing for the dance. Two hundred tickets were issued at 8 shillings apiece, and Herr Moritz Wurm and his Blue Viennese Orchestra were engaged, at a cost of £32 10s. Other College members were preparing for the dance as well, including Dorothy L. Sayers, who asked her friend and fellow luminary of the Mutual Admiration Society, Charis Barnett, to help her arrange dancing lessons.

The dance itself went splendidly by all accounts, with the hall holding a substantial number of onlookers along with 90 dancing couples. Starting at 9 p.m., refreshments and ices were served on the balcony, the band played ‘inspiriting music’, and the guests danced with ‘increasing vigour’ until the festivities ended at 4 a.m.

In the College log book, the dance was described as a tremendous success; the floor of the hall received particular notice, apparently being much praised by the participants! The event was a reflection of the College’s confidence and optimism. Somerville was growing in size and in stature, celebrating its new buildings and position within the University, inching ever closer towards hard-won degrees for women.  Few could have anticipated that, within a year, the hall would be part of a hospital.  At dawn on 23rd June, the surviving revellers were photographed on the Library steps in their dress finery, as the evening and an era ended.