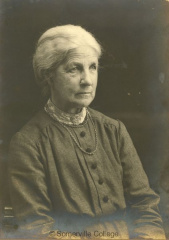 Charlotte Green was a member of Somerville Council from 1884-1929 and its Vice-President from 1908-1926. She was the sister of poet and literary critic John Addington Symonds, the aunt of future Somerville Principal Dame Janet Vaughan, wife of philosopher T H Green (one of the founding members of Somerville Council) and champion of higher education for women.   At one stage she was considered to succeed Miss Shaw Lefevre as the second Principal of the college. There are two portraits of her in the College, in the Treasury Corridor in House and in the Senior Common Room.