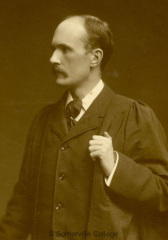 Last weekend saw the opening of Somerville’s new accommodation buildings for undergraduates by the Chancellor of the University Lord Patten of Barnes.  One of the floors in the new building has been named the Gilbert Murray Floor so it seems apporpriate to devote this post to Professor Murray and his association with Somerville.

Professor Gilbert Murray was both a great classical scholar and an influential internationalist.  Regius Professor of Greek at Oxford from 1908 to 1936,  he was also a founding member of the League of Nations Union in the UK and later three-times President of the United Nations Association.  Murray was a modest and moderate man (he twice refused a knighthood, was a vegetarian and teetotaller) but he nevertheless made a huge impression on all he met.

Murray first came into contact with Somerville College whilst an undergraduate at St John’s (1884-88) when he was invited to tea with the first Principal of the College, Madeleine Shaw Lefevre.

He resumed his acquaintance with Somerville when he returned to Oxford in 1905 after a brief spell as Professor of Greek at Glasgow University.  His interest in Somerville stemmed from his conviction of the importance of higher education for women and he worked steadily to support this cause.  He was elected to serve on the governing Council of the College in 1908, chairing the library Committee throughout this period, and remained an active member until his death in 1957.  Always a source of wise counsel, he was delighted when Dame Emily Penrose, the Principal of Somerville helped steer Oxford University towards the awarding of degrees for women in 1920.

In this photo from 1920. Murray is pictured with Emily Penrose, Principal of Somerville following the first degree ceremony at which women received degrees at Oxford.  The degrees were awarded to the five heads of the womens Colleges, presented by the presidents of their Councils – a task which fell to Gilbert Murray.

His involvement with the College consisted not only in the role he played in its governance: he also persuaded his wealthy mother-in law the Countess of Carlisle to endow a research Fellowship at Somerville, a fund that still provides Somerville Fellows with research leave to this day.  He often gave lectures at Somerville and in 1912 he helped the students to put on a production of Aristophanes’ play  The Frogs – a play that he had translated.  It was revived at Somerville thirty-four years later after the Second World War in 1946 with Gilbert Murray in the front row of the audience.