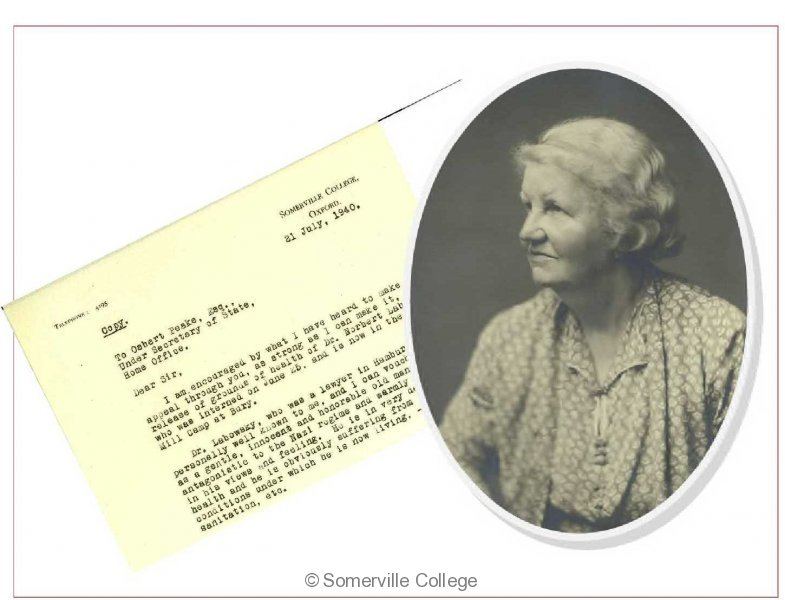 As with many primary sources, the Somerville Minutes of Council were created as an official record of the insitution yet they are inadvertently informative about the world outside the College walls. In the 1930s, they provide a valuable account of the response of British academia to the persecutions of the Nazi regime.

Hitler’s appointment as German Chancellor in January 1933 was soon followed by the dismissal of prominent Jewish professors. By May 1933 the Academic Assistance Council had been founded to help the persecuted seeking to leave Germany and an appeal was made to universities across Britain to assist with offers of work and sponsorship.

Somerville’s Principal, Helen Darbishire, was particularly active in Oxford’s refugee schemes. To augment College payments, she established a fund for the assistance of Dismissed German Women Scholars, appealing to the Association of Senior Members via that year’s ASM annual report.  The Council minutes of October 1933 note that the Principal and Fellows had already agreed to offer temporary appointments where possible and Frau Dr Margarete Bieber, the former Professor of Classical Archaeology at Gottingen University, was one of the first to benefit, being offered an Honorary Research Fellowship and hospitality for three terms. Dr Bieber was also employed to give a course of lectures, funded jointly by the women’s colleges.

The College assisted other refugee women scholars, ( Elise Baumgartel,
Kathe Bosse,  Leonie Zuntz, Gertrud Herzog Hauser and Lotte Labowsky) with offers of research grants, hospitality and employment, endeavouring to use the limited finances at its disposal to the greatest effect. When internment as an enemy alien threatened, Helen Darbishire’s testimonials were instrumental in securing Dr Labowsky’s continued liberty and obtaining the release of her father. Such scholars in turn benefitted Oxford and its Colleges by their contributions to academic and community life. Lotte Labowsky’s association with Somerville, as acting librarian, research fellow and additional fellow amongst other roles, was to continue until the end of her life in 1991 and beyond, with a major bequest to the College.