“Another year finds us still scattered, and Somerville’s hospital work still as urgently needed. We at present occupy Micklem Hall, Sheldonian House, three houses in King Edward Street, and one in Oriel Street, besides St Mary Hall. Our numbers, however, have not diminished at all: this Term there are 107 students in residence.” The Fritillary, December 1916

October 1916 saw the beginning of another academic year. Most of Vera Brittain’s contemporaries were entering their third and final year, preparing for Schools and occupying the various offices of the JCR. However, the report in The Fritillary is inaccurate in claiming that student numbers were undiminished; 20 per cent of 1914’s intake had swapped academe for war work and in total, one third of that year’s matriculants had already left, having completed shorter courses or abandoned their studies. There continued to be a small but steady loss of students to war service, a matter increasingly of concern to Emily Penrose and to H.A.L. Fisher, the former President of the Somerville, who was soon to become President of the Board of Education in Lloyd George’s government.

New freshers arrived, uncertain if they would ever experience college life actually in Somerville College and quickly learned to adapt to their disjointed community. Amongst their number was Enid Starkie, French scholar, pianist and free-spirited Irishwoman, who appears to have circumvented the inconvenience of living out by ignoring the rules which restricted her. Although women students were forbidden to be out alone after dinner, a fellow student would later recall how:

“Miss Starkie told us that she had a bath every night in quad, and then walked home to Teddy Street, where she lives, lightly but elegantly attired in her nightdress and an overcoat!…. If the Pen heard, there’d be the most unholiest row that ever was. We’re not allowed even to cross Oriel Street without a hat on.”

The Boat Club and Hockey Club both benefitted from an influx of enthusiastic new members as did the debating societies, those attending Parliament showing ‘keen interest and marked ability’ and at Tub Thumpers ‘the First Year, of whom great things are hoped, particularly distinguished themselves’.

The members of Sister Susie resumed their weekly sewing meetings and were joined by the Suffrage Society producing bandages. As before, the shirts and other garments made in the college went to patients at the Somerville Section hospital. 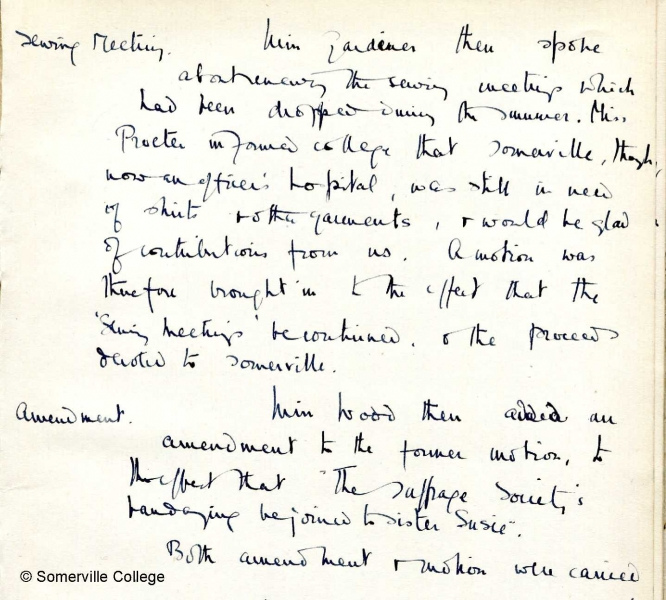 At the October college meeting, the students also voted in favour of using some of their funds to make a grant for folk dancing: English country dancing was enjoying a revival at this time and dancing classes had been well attended the previous year. Despite separations and regulations, college life continued.