“The darkened streets have added to the difficulties of our scattered community life and have made journeys to and from the lodgings – even with the aid of a torchlight – a service of danger.”  SSA Annual Report 1916, Oxford Letter

In Michaelmas Term 1915, there were 101 students in residence at Somerville, over a third of which were first years, newly arrived in Oxford. Until 1913, on the Woodstock Road site, students would have resided in one of two buildings, ‘House’ (Walton House, in which Somerville Hall was established in 1879) and ‘West’ (the first purpose-built addition to the Somerville site).

Students became closely affiliated with one house and enjoyed a friendly rivalry with the other. It was only from 1913 and the construction of the new Maitland Hall, that all the students had been able to eat together, helping to unite the college. After vacating the Woodstock Road site, St. Mary Hall Quad formed the nucleus of Somerville, accommodating most of the ‘freshers’ (with some lodged in nearby King Edward Street) and every attempt was made to promote collegiate coherence and a sense of belonging amongst the dispersed Somervillians.

The difficulty in getting to know students who had only arrived ‘since the migration’ was keenly felt, especially as social gatherings were now limited, out of a sense of duty as much as due to the disjointed living arrangements. In the longer term, there were concerns that college traditions, relatively newly formed but valued nonetheless, would be lost as those students with experience of college life before the migration completed their studies and left Oxford.

The opportunities for college gatherings were also affected by the air raid precautions put in place by the city council. Although the first Zeppelin attack on Britain had been in January 1915, Oxford had not been targeted and when the main electric street lights were switched off in August, it was more as a cost cutting exercise than as an air raid precaution. Further scares led to additional measures and from October, most of the street lights were turned off at 11pm in case of Zeppelin raids.  Somerville’s Council, meanwhile, was in negotiation with the War Office over responsibility for insuring the College buildings against ‘attack by hostile aircraft’; the War Office held firm and the College paid for the policy the following month. 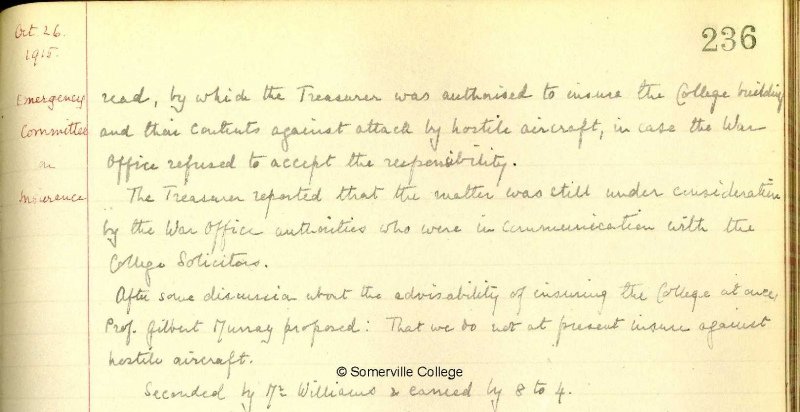 By February 1916, Oxford had come under a Home Office Lighting Order, with a black-out imposed on street, shop and domestic lighting. The air campaign, when it finally began in earnest, largely bypassed the city, targeting London, industrial and coastal areas. The residents of Oxford were more likely to be injured by accident during the black-out, as pedestrians collided with trees, traffic or each other, than from an air attack.