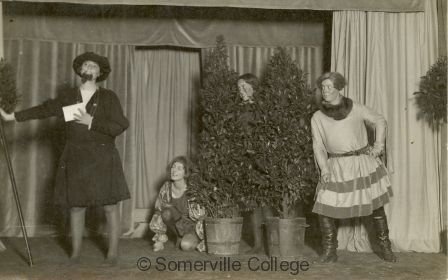 There was a strong dramatic tradition at Somerville in the first half of the twentieth century with plays being written and performed in College most years.  In its dramatic heyday, the College could boast a Second Year play in Michaelmas Term, a First Year play in Hilary and The Going Down Play (by the finalists) in Trinity.  This scene is taken from the 1921 production of Twelfth Night.  Comments gratefully received from anyone who can identify the actors!